Posted on November 8, 2011 by abergavennyfoodfestival

If you haven’t yet discovered Green Saffron now is the time to check out their fresh, fragrant and vibrant products and to catch up with Arun Kapil,  the man who is raising the bar in the spice business. And if you have discovered them, you will probably want to do it again.

Arun Kapil is in some ways an unlikely food hero. We are used to the idea that the founders artisan food businesses have come from some other career. But Arun’s route has been more circuitous than most. 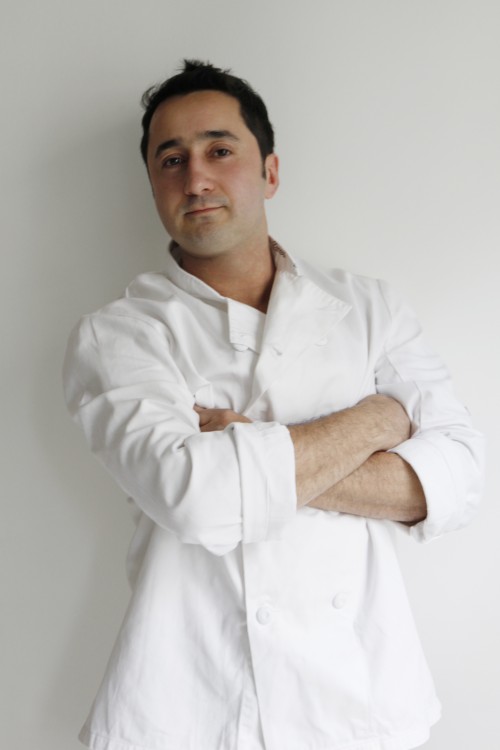 He describes his former career as having been a ‘music entrepreneur’. He was in the thick of the music scene of the nineties:  a time of clubs and clubbing, and – for those of us who weren’t there – one unfathomable genre after another:  rave, acid-house, garage, trance, techno… Arun’s particular claim to fame was to have put out the first ever recorded DJ mixset  on his Funky Peace Productions label.

His experience in the music business did, albeit tangentially, pave the way for his entry into the food world.  Tiring of the frenetic pace of clubs and record deals and wanting a break he decided to enrol on a cookery course.

“I was not planning to be a chef. I just loved food. I thought I would go somewhere like Prue Leith’s. But then a friend suggested this place in Ireland and I thought why not go somewhere completely different.”

So it was that he came to Ballymaloe and to Ireland. And a twelve week cookery course became a new life. It was while working in the restaurant at Ballymaloe that he took his first steps into the spice business.

“A new farmers’ market was starting up locally” he recalls “and a friend and colleague suggested we take a stall together. She would sell jams and preserves. I would sell spice blends. We would call it Sugar and Spice.”

By now he was fully-immersed in the Ballymaloe philosophy of total respect for authenticity and provenance. Coming as he does, from a big Indian family, Arun had visited relatives over there many times and always been blown away by the freshness and vitality of the spices they used.  There was no alternative. He would sell the freshest and most aromatic spices that had ever been seen in Ireland. And he would source them direct from the farmer.

“Everyone advised against it. Spices are a commodity traded by multinational companies. It’s easy to buy ground spices but buying fresh and sourcing from farms is another matter.  But in the music industry I had seen how it was to deal with commodities.  I was determined this would be different.  This was about making something beautiful; staying honourable; doing the hard work.”

It would be a family business. He enlisted the help of his cousin in India, and his father helped him negotiate the thicket of regulations that surround the business of exporting spice from India. The first batches duly arrived at Cork airport to be ground and packed in a portacabin – “we wrote on the packets by hand with silver and green pens” – and sold super- fresh at the farmer’s market.

Five years on Green Saffron products are still sold at farmers’ markets. But they have developed a retail network in Ireland and added an on-line shop. The spices are now sorted and graded at a warehouse in Moradabad India, before being shipped.  This year they won their first gold Medal in the Bord Bia Irish National Food Awards.

Arun has garnered an amazing following among chefs and restaurants. Richard Corrigan and Paul Flynn are fans. So too are Joel Robuchon, Alain Ducasse and Pascal Sanchez. Customers for his spice-blends include such iconic names as The Dorchester,  The Fat Duck,  The Manoir, Claridges  and The Ritz.

He has become a well-known figure in the Irish food media and this year has been handed the prestigious task of making the Christmas cake on Four Live RTÉ One’s flagship daytime show.

It’s been a long journey from that first farmers market but Arun is still bursting with enthusiasm for the challenge. Having introduced us to a quality of spices rarely seen this side of the Khyber Pass he is now determined to show us how to use them.

“I want people to think of spices not just in the context of Indian or Asian food. I want them to think of them as an everyday seasoning.  To innovate, experiment… when two flavours work together that is something beautiful. Fresh spices make vibrant flavours.”

This entry was posted in News and tagged arun kapil, greensaffron, spice. Bookmark the permalink.