Posted on September 1, 2011 by abergavennyfoodfestival

I arrive a little early to meet Fergus Henderson at St. John’s in Smithfield, so I sit at the bar and gaze up around the huge cavernous space that surrounds me. The décor is minimal and unpretentious: simple wooden tables and chairs, the whitewashed walls left unadorned of art or trinkets. In spite of this the restaurant does not feel 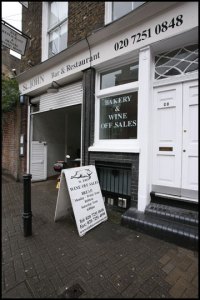 cold. Quite the opposite in fact.

An old Georgian smokehouse, over the years the building’s been used variously (and in no particular order) as a greenhouse for harvesting bean sprouts, a Chinese beer store, a squat and the occasional rave, before Fergus Henderson, with Trevor Gulliver and Jon Spiteri, turned it into one of the finest restaurants in the world.

A regular contender in “World’s 50 Best Restaurants” list (it’s highest ranking was 16th), it has become a site of pilgrimage for foodies all over.

It’s while admiring the space that I notice Fergus, in the corner of my eye, entering the room. (I say entering, but that does him an injustice. He doesn’t enter: He bounds.) Wearing his trademark Labour & Wait work jacket, he greets me with a jolly grin and we immediately start on the building. 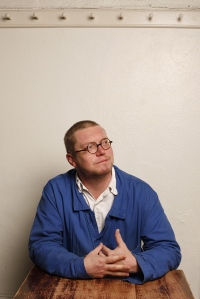 “No gastronomic crutches here” he says “no big glasses, big menus, red velvet or marble or brass. The English feel they need that sometimes… we don’t have that.

Here the food is the focus. No distractions, no embellishment. The menu advertises deceptively simple offerings such as “Mushrooms on Toast” or plainly put “Grouse”. And it this straight forward and honest approach to food that has garnered the restaurant the critical acclaim it so deserves.

When it opened in 1994 it became an immediate sensation. Affectionately known as “the restaurant” to its most ardent fans, people would speak of it in hushed tones, with clandestine, quasi-religious fervour.

And it wasn’t long before Fergus’s approach began to influence chefs the world over. His “Nose to Tail” approach (in the thrifty rural British tradition of making delicious virtue out of using every part of the animal) spawned a food revolution, most notably across the Atlantic in New England and New York, where trotter and pigs cheek have become de rigueur restaurant fare.

I ask Fergus what he thinks about this. “Well I love a chef to work with me and go off and do other things. I feel very Mother Hen-ish about it. Cluck cluck!” He laughs. “I wasn’t aiming to change anything”.

Then, as if an epiphany has struck, Fergus exclaims “Drinks!” and orders two tall gin and tonics (made with Plymouth, and the delicious Fentimens tonic), and from there we set about proper business: hangover cures, the subject of his imminent talk at the Abergavenny food festival.

Fergus is actually a little bit anxious about the term, ‘hangover cure’. He squirms at its utterance. “Well… it’s a bit laddish” and he chuckles. “You see, getting drunk is really an unfortunate consequence,” and he appears generally irritated at that fact.

“It gets in the way. It can be terribly annoying. But that’s the thing with nice drinks. You get thirstier and thirstier, and they tend to get more and more delicious!”

Which brings us on to Fernet Branca, a drink that Fergus is famous for championing. A deeply flavoured, dark green and herbaceous spirit. It’s very bitter, and very strong (45%). Perhaps an uncouth way to describe it might be Jägermeister without the sweetness (they are both part of the broad “Aramo” family of liqueurs), and while popular in San Francisco and Buenos Aires, it’s still a rare find on the British Isles.

Importantly, Fernet Branca forms an essential component of Fergus’ famous cocktail “Dr. Henderson”, introduced in his highly celebrated 1999 classic “Nose to Tail Eating”. In this cookbook, the drink’s tagline is simply “A Miracle”. He claims that whether the patient in question is suffering the ill effects of a heady night or an overzealous meal, Dr. Henderson acts as the perfect cure for indulgence.

“It solves anything – pains, sleep, mood” Fergus enthuses… “This drink works. It’s truly wonderful stuff! It leaves you transformed and looking fantastic.” I ask him if he uses it for purely medicinal purposes or for pleasure also?

“Oh for pleasure. I like Fernet Branca straight up!” At which point Fergus announces, “This feels very strange – we should be having one!”

Two minutes later, a green murky liquid over ice is sitting in front of me. “It should look like pond water,” Fergus reassures me as I tentatively bring the glass to my lips.

Drinking Fernet Branca is a wonderfully complex experience. The taste is somewhat at odds with what your pallet expects (like those initial sips of beer or wine in adolescence), but it grows on you swiftly.

“It’s sad to think it’s just a hangover cure. The things that go in Fernet Branca are unbelievable; saffron, frankincense, myrrh, aloe vera. Interestingly the American version can’t have aloe vera in it. I don’t why, but I know that fact!”

I ask Fergus if he feels any other elixir comes close? He reels off a list of exotic sounding names of what I presume are other “Fernets” (the family of drink of which Fernet Branca belongs) but is conclusive in his opinions. “None of them have the integrity, or the spiritual uplifting nature of Fernet Branca.”

What about the other “medicinal” drinks? He pauses for a moment and frowns. I suggest Bloody Marys? The frown intensifies. “Too thick! But they do a wonderful Black Velvet at Sweetings in the City. Puts you in the mood for romance. I proposed to my wife there!”

Finally, before I go, I ask Fergus, with a new book coming soon (“A complete Nose to Tail – Parts I & II”), his festival dates, and of course, the new St. John’s Hotel in Lyle Street, Leicester Square, are we seeing the start of a new, ever-expanding empire?