Posted on August 16, 2011 by abergavennyfoodfestival

Anand George arrived in London in 2005. He has since redefined Indian cooking. Having trained as a chef in some of India’s finest restaurants, Anand arrived in London with big dreams and started his British career on London’s Oxford St, cooking at La Porte des Indes – a French-Indian curry house. As senior sous-chef he spent two and half years there before bravely deciding to up sticks, move to Cardiff, and open his own restaurant, the Mint and Mustard.

Despite the onset of the credit crunch Anand’s foresight paid off. The Mint and Mustard has become a firm Cardiff favourite, and the Kerala-born chef has won prestigious awards, including South Asian Chef of the Year and the Tiffin cup award which he received at the House of Commons no less. 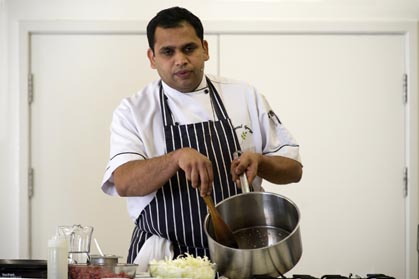 Now he’s moving onto new things again. No longer cooking at the Mint and Mustard, Anand plans to open a new restaurant in October. He describes his style of food as “the food we eat: Indian food with better presentation” and draws inspiration from all over India.

“I return every couple of years and travel all over as I want to see what the new trends are there,” he explains.

His tenacity works; a bidder once paid £15,000 at a charity auction to have Anand cook dinner for him at his house. “That was the most challenging meal I ever had to cook. Now the challenge is working alone. I still cook for people, but they think I have an army of eight chefs behind me still when I don’t!”

Trends, innovation and challenges are clearly what drive Anand and for the Abergavenny Food Festival he’s set himself yet another challenge; Popupadum.