Shakespeare’s in love with Chardonnay on the beach…

Posted on April 7, 2011 by abergavennyfoodfestival

As I’ve mentioned previously, I’m not a full-time food journalist. By day I swot up on the business affairs that affect London, preparing for the launch of a new website called LondonLovesBusiness. But sometimes my two worlds collide. The week before last, at around 5pm, I felt the usual lusts for a chilled glass of Chardonnay coming on (yes I like Chardonnay, I’m no member of the ABC clan – that’s “anything-but-chardonnay” for the initiated. I also like Chablis, as do many people who pretend not to like Chardonnay).
Anyway, rant over. So, just as I was salivating from thoughts of those first sun-filled, straw coloured sips, my inbox beeped. One thing before I go any further, I’m no alcoholic, I’m a writer.
The beep was in fact an e-vite to a fine wine and foods tasting at Harrods’ new Gastronomic Tasting Room. The recently opened events room is available for private dining and wine tastings and can be booked at very reasonable prices, as well as jaw-droppingly huge ones too – depending on your budget. 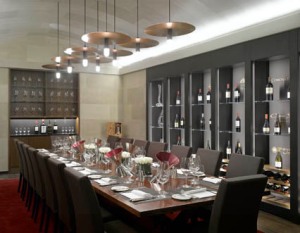 Oh the perks of being a journo, I was down there like a shot. Once there I simultaneously quaffed and cultured myself, allowing the sommelier to feed my brain whilst the champagne and Pinot Noir worked its magic…
On Saturday, perusing a two week old copy of The Week and contemplating my (booze-free) breakfast, my phone beeped. Another invite. This time to get out of London and visit the beach. You know that final scene in Shakespeare in Love where Gwynnie walks along that amazing beach? Well we went there. It’s called Holkham Beach and – like all good beaches – it makes you thirsty. Thankfully, very close to the beach is the Holkham Adnams Cellar & Kitchen Store; a cellar equipped with fantastic wines – many of which are available to taste – and fantastic service. I left the shop with both my head and purse significantly lighter.
As for the beach (we just about made it), I think Keeley’s pictures speak for themselves. The only disappointment was the lack of oysters – wrong time of year. And we’d missed the market anyway. But the regret was made even more poignant 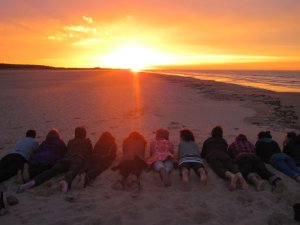 by the abundance of razor clams and oyster shells that crunched tauntingly from under my feet as I strolled wistfully pretending to be some Hollywood star. I know, I really need to leave London more.
So sadly no oysters, but, fortunately, we did get hold of Lisa Stockton – aka Happy Kitchen. Lisa, whom I’d not met until our paths were luckily enough to cross on the Norfolk sands, cooked my friends and I dinner that night.
Fittingly, we had fish stew; Moroccan spiced with smoked haddock and wild garlic from the garden. Rich and intense, the dish was homely, exotic and fresh in that way North African food manages to do so well – also the attributes, I imagine, to being a good mistress. One thing before I go any further, I’m nobody’s mistress, I’m a writer.
Needless to say, next time you’re in London you should visit Lisa’s other venture in London Fields, The Bakery @ Arch 402, 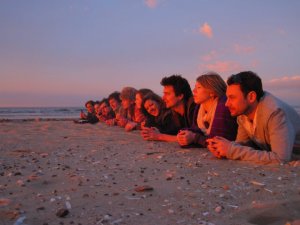 you won’t be disappointed. And if you get the chance pop by Harrods too.