Posted on March 24, 2011 by abergavennyfoodfestival

For those who haven’t had the pleasure of visiting Corrigan’s, it’s all very nice: wooden panelling, sporting greens, lavish and traditional. (Just how one would imagine a Mayfair restaurant to be.) When I arrive Richard is greeting a group of businessmen at the bar. Dressed in chef’s whites he cuts a stark contrast against the tide of grey suits and neat hair. Warm and affable, I watch him lead a casual conversation that takes in the evening’s menu, where the guests are from, what they want from the evening – “if you want to be left to discuss business and we’re bothering you, just let us know” – before he dashes off to Bentley’s. It is all very genuine, impressive and personal.

His partner Chris McGowan is equally agreeable. In one of the private dining rooms, from where diners can enjoy VIP five star views of the kitchen, we chat about Abergavenny and the chefs’ plans for the festival. Ha! Wouldn’t you like to know? Well my lips are sealed. (Though, were you to need ‘help’ in the bedroom, perhaps a visit to their talk at the festival would help…) 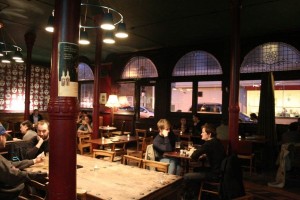 Unlike a visit to The Jolly Butchers Cider and Ale House, whose aptly named ‘big plates’, would quash even Hugh Hefner’s sexual appetite. I’ve wanted to eat here for ages. A few Sundays ago I had a fantastic lamb roast here, and I’ve wanted to sample the full menu ever since. Anyway, I write this happily sated; very full and not disappointed.

The Jolly Butchers has been open since April and it’s wonderful – and not in a pompous overpriced gastro-pub kind of way. I had fish and chips; coley fillet in Weiss-beer batter with triple blanched chips cooked in goose fat. The batter was crisp and dry and made a gentle dignified snap when you cut into it. Not too loud and showy, just the right gentle snap. The chips had a crust that would make… would make…  your dreams come true. The only criticism: no peas. With all that fat a vegetable would have served well to cut the richness (and ease the guilt). Also, the tartar sauce, I fear, wasn’t home made. But I’m clutching at stale cheese straws here; it really was fantastic.

The boyf had a burger (predictable) and it was also divine: Scotch Angus beef, pancetta and cheddar with the legendary chips. Cooked rare, just right. All was washed down with a beautiful Italian white and the Belgian beer, Chimay Blanch Triple, 8%. Delicious. He’s still there now, going through the beer menu. “Research” apparently.